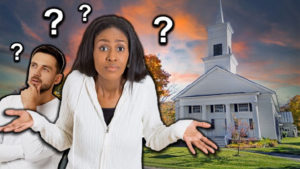 In the seventeenth chapter of the Gospel of John, Jesus prayed that prayer so many Christians know about—that His followers might be one (John 17:21).  So the question naturally arises, Why are there so many different denominations and groups out there who claim to be Jesus’ followers, but who are not at all united?

Let me suggest that it’s because Jesus’ own formula for unity, in John chapter 17, has not been followed.  Jesus didn’t simply pray, “That they all may be one” (John 17:21); He prayed first that they might be sanctified through His Father’s Word of truth.  Let’s go back to verses 17 and 19:

And for their sakes I sanctify Myself, that they also may be sanctified by the truth (verses 17,19).

In other words, according to Jesus, to be sanctified by God’s Word of truth is the first step toward being united.  Without this experience, there will be no unity.  That’s why the Bible asks, in the words of the prophet Amos, “Can two walk together unless they are agreed?” Amos 3:3).

The Bible is also clear that the light of God’s truth is progressive.  Christians are to continually follow the Bible’s teachings until they are fully faithful to the whole counsel of God.  That’s why the book of Proverbs states that “the path of the just is like the shining sun, that shines ever brighter unto the perfect day” (Prov. 4:18).

And let’s keep in mind that God is fair with those who haven’t received the full measure of light and truth.  The Bible says that God winks at the times of our ignorance (Acts 17:30), and tells us that “to him who knows to do good and does not do it, to him it is sin” (James 4:17).  For example, God used Martin Luther in a mighty way to start the Protestant Reformation.  But he didn’t understand much of what the Bible teaches.  He taught that the Lord had predestined some to be saved and others to be lost, which is totally contrary to God’s Word, which teaches that whosoever believes in Jesus will not perish, but have everlasting life (John 3:16).

Luther was also an anti-Semite, whose hatred of Jews would later be celebrated by the Nazis.  Yet the Lord used him to do a great work.  This proves that God’s truth is progressive and that, as Proverbs tells us, it increases and grows brighter till it is perfectly revealed.

Many Christians, unfortunately, aren’t willing to make this sacrifice.  Jesus spoke of how His message to the world would not only bring unity among those who accepted Him and followed His Word, but that it would bring division also, because too many would choose instead to follow their own way.  In Jesus’ own words:

This is because so many refuse to follow the commands and counsel of the Bible.  It is because too many prefer their own ways to the ways of the Lord.

Most of the division we see in the Christian world today goes all the way back to the Dark Ages, when the Bible was forcibly hidden from the masses of people in so much of Western society.  The book of Amos speaks prophetically of a time when there won’t be a famine of bread or a thirst for water, but a famine because of ignorance of God’s Word (Amos 8:12).  The book of Acts also predicted this time, when false teachers would lead multitudes astray (Acts 20:29-30).  This is what happened during the medieval and early modern centuries throughout most of Europe.

The Bible speaks of how the time would come when people wouldn’t tolerate sound doctrine, and would have “itching ears” when God’s truth was presented (II Tim. 4:2-4).  One of the main reasons for this is because so many religious leaders ignore the great truths of the Bible.  the prophet Ezekiel talks about this when it speaks of how princes—leaders—ignore God’s true Sabbath and inflict horrible injustice upon those who seek their help against wrongdoers (Eze. 22:6-16).  Popular sins are too often embraced rather than rebuked by those possessing religious authority.

But God has always had a faithful few—a remnant who are true to Him, as the Bible describes them (Joel 2:32; Zeph. 3:13; Rev. 12:17; 14:12).  Jesus spoke in His Sermon on the Mount of how “narrow is the gate, and difficult is the way which leads to life, and there are few who find it” (Matt. 7:14).  So let’s not expect a large majority to ever be on the Lord’s side.  A few years ago conservative Christians in America called themselves the “Moral Majority.”  But that has never been true in the course of sacred history, friends.  Those faithful to God and His Word have never been anything close to a majority.

In our day, the Protestant Reformation still continues.  Truth is more important now than ever before.  Many in Christian circles today are fulfilling Paul’s prediction to Timothy, in which he spoke of how so many will have “a form of godliness, but denying its power” (II Tim. 3:5).  False teachings will be everywhere in the last days.  Jesus said so in Matthew 24 when He warned of false christs and false prophets showing great signs and wonders, to the point where even God’s very elect—the most faithful among His followers would stand in danger of being fooled (Matt. 24:24).

The prophet Isaiah tells us to restore the paths for God’s people to dwell in, and to repair the breach made in God’s law (Isa. 58:12).  This breach involves God’s true Sabbath, established at creation and still binding on all men and women everywhere (verses 13-14).  God will have a people at the end of history who will keep all of God’s commandments (Rev. 12:17), and who will gather God’s true sheep out of every fold of faith where they are presently found.  Remember that Jesus said:

Other sheep I have which are not of this fold; them also I must bring, and they will hear My voice, and there will be one flock and one shepherd (John 10:16).

The book of Revelation speaks of this final call to God’s faithful ones in every religious community, when it speaks of the fall of spiritual Babylon and commands God’s people to come out.  The mighty angel depicted in Revelation chapter 18 declares this summons to every sincere and searching heart in all the world, during the great crisis of the last days:

Notice these are God’s people being called out.  That’s what the church means in the Bible—God’s called out ones.  God has His people in every religious community.  But at the end of time they will be called out of those communities into one community of total faithfulness and obedience to His Word.  Thus the book of Revelation declares of God’s faithful remnant at the end of history:

And the dragon was wroth with the woman, and went to make war with the remnant of her seed, which keep the commandments of God, and have the testimony of Jesus Christ (Rev. 12:17).

Ask yourself, my friends: What Christian community in this world is preaching this message?  Who among Christians is declaring the message of the three angels in Revelation chapter 14?  Which community of Christians on earth is upholding all of God’s Ten Commandments, and doing so in every land and continent on earth?

God has an organized body of believers, my friends.  God is not the Author of confusion, the apostle Paul says, but of peace (I Cor. 14:40).  Ephesians chapter 4 and First Corinthians chapter 12 speak of the gifts of the Spirit, one of which is government and organization.  God has a true church in this world, brothers and sisters.  Our task is to search the Scriptures to find what God’s truth is, and then to find that community of believers out there which teaches and practices what God’s Word commands.