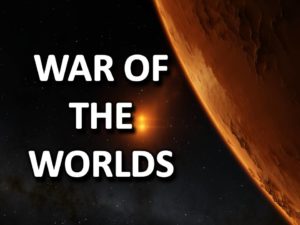 It would become the most famous radio program of history. It was the night America panicked. It all began as very unremarkable. It was a Sunday evening just like any other across America. At a few minutes past eight o clock back in the east a Sunday evening dinner was being finished and dishes were being washed. And radios across the country were being turned on as families gathered around for some entertainment. It was October 30th the day before Halloween in 1938 and it was the prime-time in the golden age of radio. For over 200 years it was a night when all manner of trickery was unleashed on the unsuspecting and tonight would be the night when the pent up emotions of a nation would be unleashed. The radio show began with a voice that announced: “The Columbia Broadcasting System and its affiliated station present Orson Welles and the Mercury Theater on the air in ‘War of the World’ by H.G. Wells. Orson Welles had recreated the science fiction novel to come to life for a radio dramatizatiwith such realism that triggered a nation wide hysteria. The radio play, narrated with the resonating voice of the 23 year old Orson Welles, had been written and performed to sound like a real news broadcast about an invasion from Mars.

Toward the beginning of the program an announcer took listeners to “the Meridan Room in the Hotel Park Plaza in downtown New York, where you will be entertained by the music of Ramon Raquello and his orchestra.” The dance music played for awhile and then it was suddenly interrupted by an announcer that reported that “Professor Farrell of the Mount Jenning Observatory” had detected massive explosions on the planet.

Then while radio listener’s curiosity was peaked the dance music came back on. But then came another interruption of another alarming news bulletin report of a large meteor that had fallen with a violent impact into a farmer’s field in Grovers Mills, New Jersey.

Then moments later a reporter was at the crash site and graphically described a strange looking Martian emerging from a large metallic cylinder. With shock and amazement in his voice he said: “Good heavens,” Then he scared the daylights out of Radio listeners who were listening with wrapped attention as he described what he saw, “Something’s wriggling out of the shadow like a gray snake. Now here’s another and another, and another. They look like tentacles to me…I can see the thing’s body now. It’s large, large as a bear. It glistens like wet leather. But that face, it…it …ladies and gentlemen, it’s indescribable. I can hardly force myself to keep looking at it, it’s so awful.

The eyes are black and gleam like a serpent. The mouth is kind of V-shaped with saliva dripping from its rimless lips that seem to quiver and pulsate.” The Martians mounted war machines and fired “heat-ray” weapons at humans that were puny in comparison that had gathered around the crash site. The Martians wasted no time as they slaughtered 7,000 National Guardsman.

Simultaneously the Martians began to release poisonous gas in to the air. Then another news bulletin reported that “Martian cylinders” had landed in other U.S. cities, Chicago and St. Louis. Because the radio audience at this time of Hitler’s barrage of fiery threatening speeches America was already on edge and prewired to respond to reports of crisis and so the radio play seemed all the more believable. Welles used sophisticated sound effects and his actors excelled in portraying frightened announcers and other characters.

Then another announcer reported that widespread panic had broken out around the landing sites and thousands were desperately trying to flee. There may have been as many as a million tuned into to the scary dramatization that actually believed that there was a full scale attack by Martians. Panic broke out all across the country.

In New Jersey horrified radio listeners jammed the highways as they tried to escape for their lives from the foreign invaders. Terrified citizens pleaded with police for gas masks to save them from the poisonous gas. Some even asked their electric companies to turn off the power so that the aliens would not see any lights in their homes. 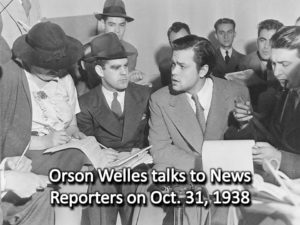 One panicked woman ran into a church in Indianapolis where there were some gathered for a evening service and yelled , “New York has been destroyed it’s the end of the world! Go home and prepare to die!” THE BOSTON DAILY GLOBE front page report read: RADIO PLAY TERRIFIES NATION, MARS INVASION THOUGHT REAL , MANY FEAR WORLD COMING TO END

A. Are we in a real war that is intensifying in these last days?

Yes but not with strange looking Martians! The spiritual warfare erupted in heave long before the creation of mankind according to the last book in the Bible, the prophetic book of Revelation: “And war broke out in heaven: Michael and his angels fought with the dragon; and the dragon and his angels fought. But they did not prevail, nor was a place found for them in heaven any longer. So the great dragon was cast out, that serpent of old, called the Devil and Satan, who deceives the whole world; he was cast to the earth, and his angels were cast out with him.” Revelation 12:7-9.

The book of Revelation makes it clear that we are in a real war that is heating up! “Therefore rejoice, O heavens, and you who dwell in them! Woe to the inhabitants of the earth and the sea! For the devil has come down to you, having great wrath because he knows that he has a short time.” Revelation 12:12.

Now the enemy is relentlessly pursuing the demise of God’s Remnant “And the dragon was enraged with the woman (the church) and went to make war with the rest of her offspring, who keep the commandments of God and have the testimony of Jesus Christ.” Revelation 12:17. . The devil has a target list and at the top is this Remnant of Revelation.

But God defends her. The woman prevails against the assaults of the devil.

B. Is America under attack?

Yes according to end time prophecy but not by Martians from Mars but from within. Gross immorality, blatant sin and wickedness sweeps across this country like never before and meanwhile America is being judged. Many feel that the favor of God is being withdrawn from this Blessed Nation. The demons of hell are seeking to destroy America. Satan hates religious and political freedom and in the last days the torch of freedom is flickering out. Expect sudden changes in America. You and can expect Revelation 13:16,16 to be fulfilled very soon. The United States will enforce the Mark of the Beast. There will be economic sanctions imposed on those who refuse the Mark of the Beast. The showdown test is coming! We are racing to the close of history.

C. How will the world end?

The world will not end by an invasion from Mars! The world will end by an invasion of Jesus and his billions of holy angels from the sky. “But the day of the Lord will come as a thief in the night in which the heavens will pass away with a great noise, and the elements will melt with fervent heat; bot the earth and the works that are in it will be burned up.” 2 Peter 3:10. The world is going to be destroyed and all the wicked in it. But God will preserve a Remnant. All of His faithful ones will be saved at last! See also: Revelation 6:14-17; 2 Thess. 2:8

Yes. Satan, the Deceiver. He “deceives the whole world.” Revelation 12:9. The antichrist is already deceiving the masses (See Rev. 13:5; Daniel 7:25). Jesus predicted that there would be many “false Christ’s” and “false prophets” that would deceive many (See Matthew 24:24). Satan is working many miracles to ensnare those who are not protected by the Word of God. “The coming of the lawless one is according to the working of Satan, with all power, signs and lying wonders, and with all unrighteous deception among those who perish,…And for this reason God will send them strong delusion, that they should believe the lie.” 2 Thess. 2:9-11. We can be thankful that God’s Word is the lie detector book.

Jesus promised that we can “know the truth” and that it will “set you free.” John 8:32. We need to engage in serious prayerful study of the Scriptures so that we will not be deceived by the popular lies of Satan.

I want to make a heartfelt appeal that you will pray fervently to understand end time prophecies and to be ready for the final showdown of the ages. The final events of Bible prophecy are rapidly unfolding. The spiritual battle is escalating. But the good news is that Jesus is coming soon to take His people home. Ready or not Jesus is coming soon!