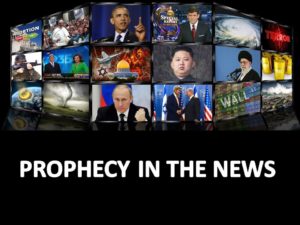 PROPHECY IN THE NEWS!

Many experts and perhaps majority of Americans believe that the Mass Media for better or for worse continues to be the most powerful influence and shaper of our American culture and generation. This reality must compel the Bible Prophecy student more than ever before to know how to interpret the news media in the light of the truth of end time Americans continue to want their news, but how and when they get it and how they interpret it is very diverse.

Getting a daily dosage of the world or local news has never been easier and so despite the fast pace of our American society still 76% of Americans, stated that they consumed some type of news on a daily basis. For many years in America siting in front of the radio or television set at certain times was the only way you could get the daily news other than the Newspaper. The “Golden Age of Television” in the 1950’s clearly confirmed that America was transfixed by the TV and willing to tune in to watch the daily news coverage. On September 9, 1963, the Huntley-Brinkley Report expanded to 30 minutes, following a similar move by CBS. It was renamed NBC Nightly News in 1970 The landscape of getting the news has changed greatly. Fast forward to the next decade, the sudden advent of cable television in the United States led to the eventual birth of cable news. Then, on June 1, 1980 an incredible historic event happened: Ted Turner launched CNN, the first 24-hour cable news operation. Years later the station gained reputation significantly with its 1991 captivating coverage of the Gulf War. With digital cable comes on-demand news programming. News operations generate news content on a 24-hour news cycle, so this means around-the-clock coverage. Now this may come as a surprise but with the multiple devices available today for news consumption still the TV remains the most popular source of news.

The availability of online and digital news has increased the ability of Americans to get news when they want. So it is no surprise why most Americans “Graze” for News whenever they feel like it. “In 2010, those who check in on news from time to time, as opposed to getting it at regular times, became a clear majority. That remains the case today: 57% describe themselves as the type of person who checks in on the news from time to time compared to 37% who get news at regular times.” PEW RESEARCH CENTER – SEPTEMBER 27, 2012

In light of these trends talking about the news is to be expected. After the news happens, immediately there is talk, commentary, interpretation on TV, internet, YouTube, radio etc. One study reveals that 30 percent of U.S. adults get their news from the Facebook feed. It’s no small wonder why Americans are willing to quickly scan the constant stream of news on FB and instantaneously share their opinions with their friends.

Viewing news with a measure of distrust is the norm. According to a recent Gallup poll “Americans distrust of the media hit a new high with 60% stating that have very little or absolutely no trust in the mass media to give the news fully, accurately, fair and balanced.” As far as most Americans are concerned the problem with the news today is that:

• Coming at us so fast that we cannot keep up with it.

• You can go through a whole range of emotions in just a few minutes.

News is constantly happening. The news is relentlessly, constantly rushing at us as a mighty uncontrollable torrent. There are so many newsworthy events which happen at the same time. Since the news is constantly live streaming we cannot keep up with all it all. Perhaps we have a new phenomenon today: News Overload! One thing for sure, we need wisdom, discernment, perception, knowledge to PRIORITIZE and INTERPRET the daily News.

Now everyone has a news filter. How you watch the news depends on your…Education, Experience, Perspective, Beliefs, Bias, World view, Relationships and more. I believe we need to see the news with new eyes to be able to “discern” and interpret the signs of the times. (See Matthew 16:3)

Putting on the eye glasses of an understanding of Bible Prophecy helps us to see events in the daily news which have prophetic overtones and connections. The dramatic fulfillment of prophecies that were forecast thousands of years ago strengthens our faith in God’s Word. Knowing the truth helps us to see remarkable prophecies in the blazing headlines!

The good news about the mostly daily bad news is that our generation can see the signs of the times more clearly than ever before! Speaking about the alarming signs of the times leading up to His soon return, Jesus said: “When you see these things, look up and lift up your heads for your redemption draws near.” Luke 21:28. So when you watch the news today remember that Jesus told us of these things beforehand. “And now I have told you before it comes that when it does come to pass (And you see it in the news), you may believe.” John 14:29 In other words, if you know the end time Bible prophecies viewing the news can actually INCREASE YOUR FAITH IN JESUS AND HIS WORD. Hence the primary reason for this website with its treasure trove of resources such as videos, audios and Bible study downloads.

So track with us as we view the news together and seek to share a prophetic perspective of end time events. As you become a diligent student of the startling and provocative prophecies for our day you will be able to testify to these words: I have more understanding than all my teachers, For Your testimonies are my meditation.” Psalms May we be like the children of Issachar: “And of the children of Issachar, which were men that had understanding of the times, to know what Israel ought to do” 1 Chronicles 12:32